THE ASCENSION OF MARY MAGDALENE, THE ILLUMINATOR

THE ASCENSION OF MARY MAGDALENE, ‘THE ILLUMINATOR’, AND THE DIVINE MYSTERY

NASHVILLE – It is now official. Pope Francis has acknowledged that Mary Magdalene, the woman “who loved Christ and was loved by Christ” and who was the first to witness his Resurrection, is on the same level as the other male apostles.

Recognizing St. Mary Magdalene’s role as the first to witness Christ’s resurrection and as a “true and authentic evangelizer,” Pope Francis raised the July 22 memorial of St. Mary Magdalene to a feast on the church’s liturgical calendar, the Vatican announced on June 10, 2016.

This is absolutely wonderful (old) news. Her ascension is complete.

What is new and exciting about it for me is the esoteric language in the Vatican’s decree formalizing the decision and where decoding it leads us.

The decree was published by the Congregation for Divine Worship June 10 along with an article explaining its significance.

Both the decree and the article were titled “Apostolorum Apostola” (“Apostle of the Apostles”) and represent an update on the Vatican’s position on the Magdalene.

According to the article’s author, Arthur Roche, the Secretary of the Congregation for Divine Worship, the decision will “reflect more deeply on the dignity of women, the New Evangelization, and the greatness of the mystery of Divine Mercy.”

Magdalene is presented as a ‘new paradigm’ for women and her elevation will reflect the mystery of Divine Mercy?

The mystery of Divine Mercy? What is that?

Pulling on the golden thread of the Vatican’s vernacular here will lead us down a wormhole of immense beauty and a fuller understanding of why Mary Magdalene was the ‘Apostle of the Apostles’.

THE MYSTERY OF DIVINE MERCY

The Mystery of Divine Mercy refers to the love God has for all of us and an appearance by the resurrected Jesus to a polish nun, St. Faustina Kowalska (1905-1938). Our goal is to let God’s love flow through our heart, like a river, to all those who need it.

St. Faustina’s encounter with the resurrected Jesus showed us a new way to succeed in our goal.

Faustina stated that whilst she was in her cell on the night of Sunday, 22 February 1931, Jesus appeared to her as the “King of Divine Mercy”, robed in a white garment.

As my readers know, the white garment or “cloak of the illumined ones” is the symbol for the robe of the soul, the light body or resurrection body of Christ.

Faustina wrote that Jesus’ right hand was raised in a sign of blessing and the other was touching the garment near his breast, and that from beneath the garment slightly down, aside his breast, emanated two large rays, one red, the other white.

Paint an image according to the pattern you see, with the signature: “Jesus, I trust in You”. I desire that this image be venerated, first in your chapel, and then throughout the world. I promise that the soul that will venerate this image will not perish.” 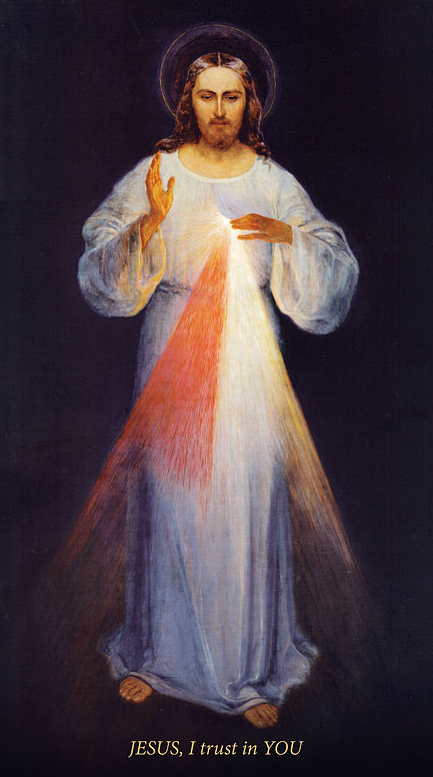 According to the diary of St Faustina, the image is based on her 1931 vision of Jesus.

“I promise that the soul that will venerate this image will not perish.”

Wow! Those are powerful words.

Venerate means to adore or love.

While it is believed that Jesus physically appeared to St. Faustina (rather than psychically as an interior vision) he spoke to her of the power of images to transmit Divine Love.

Faustina wrote that Jesus stressed the importance of the image as part of the Divine Mercy devotion, and in Notebook 1, item 327 she attributed these words to Jesus:

“I am offering people a vessel with which they are to keep coming for graces to the fountain of mercy. That vessel is this image with the signature; ‘Jesus, I trust in You.”

Our goal, Jesus is saying, is to let God’s love flow through our heart to all those who need it.

One, if not the, way of connecting with the Divine Love is through sacred art.

Catholic devotions thus stress the importance of the image as a “conduit for grace” as part of the Divine Mercy message. Over 100 million Catholics have ‘venerated’ this image and have been altered by its power.

Jesus is saying we can connect with him through this divine image of him, specifically this painting. It is a vessel that will transport us into divine space where we meet him.

In other words, Jesus is saying this painting is a portal to salvation or eternal life.

I could hardly contain my excitement when I read these lines and connected the dots with the work Clare and I have been doing on sacred art.

I bolted out of my desk chair and flew down the stairs of our home to tell her all about it.

For the past five years we have been sharing knowledge of the sacred power images, especially icons of Christ, and avatars and gurus, and how they were created to transmit Divine Love.

More, we have shown, certain examples of sacred art are intended or designed to be sacred mirrors, portals to the afterlife and conduits for our ascension.

A major part of our spiritual practice is collection, veneration and sharing of sacred images.  It is the core of our Work. It is what we love to do. It is the basis for our spiritual adventure tours. We believe that in showing this art to you we are bringing the light of the Divine to you. Taking you to it is our mission and goal.
Sacred art, we believe, is the other half of the written scriptures of the all the world’s traditions.  It is a conduit to divine realms and beings. They are sacred mirrors. Contemplation, reflection and meditation on sacred art programs our DNA. It is the Stone of Transmutation sought by all the world’s mystics.

This is the premise of our Gaia TV show, ARCANUM.

I also discussed the basic points of our findings in my article, “The Awakened Soul: The Lost Art and Science of Ascension and the Ultimate Yoga Experience”.

Now, knock us over with a feather, here is an account of Jesus, himself, saying adore him and BE LOVED via an image!

Or, find a quiet corner and listen what Jesus via St. Faustina has to say on this day we celebrate Mary Magdalene’s Ascension.

Clare and I are still shaking our heads in utter adoration.

Jesus is shown in most versions of the Divine Mercy image as raising his right hand in blessing, and pointing with his left hand on his chest from which flow forth two rays: one red and one white (translucent). 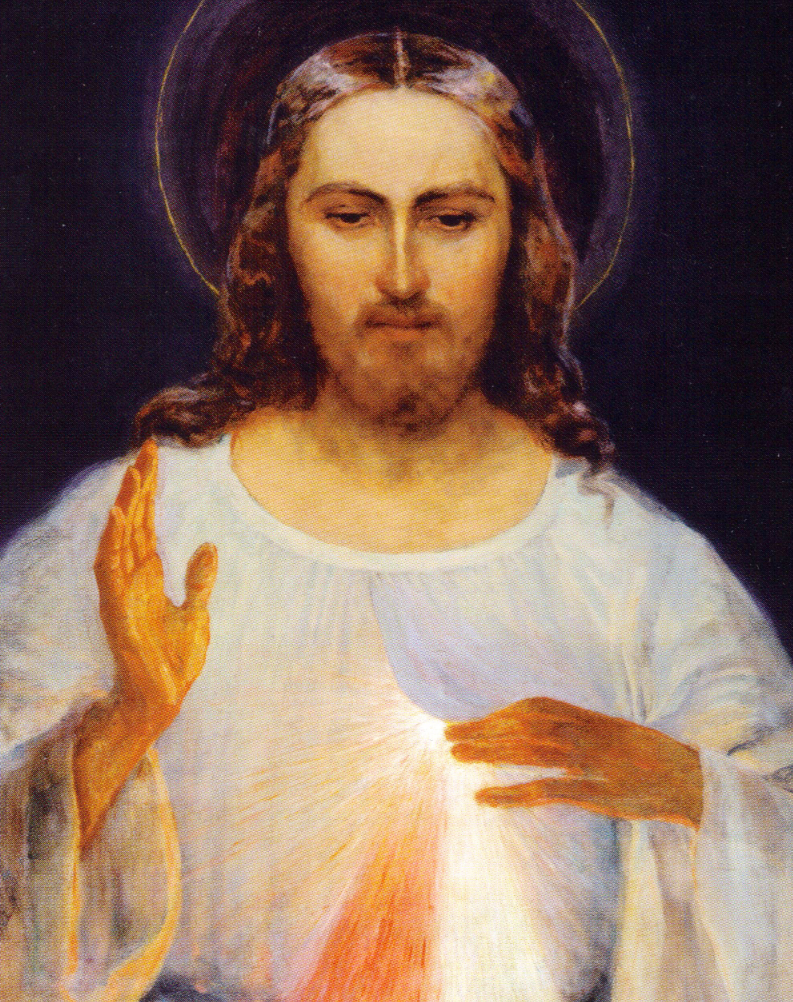 St. Faustina’s Diary records what Jesus says about the symbolic meaning of the rays streaming out of his body:

“The two rays denote Blood and Water. The pale ray stands for the Water which makes souls righteous. The red ray stands for the Blood which is the life of souls… These two rays issued forth from the very depths of My tender mercy when My agonized Heart was opened by a lance on the Cross.” 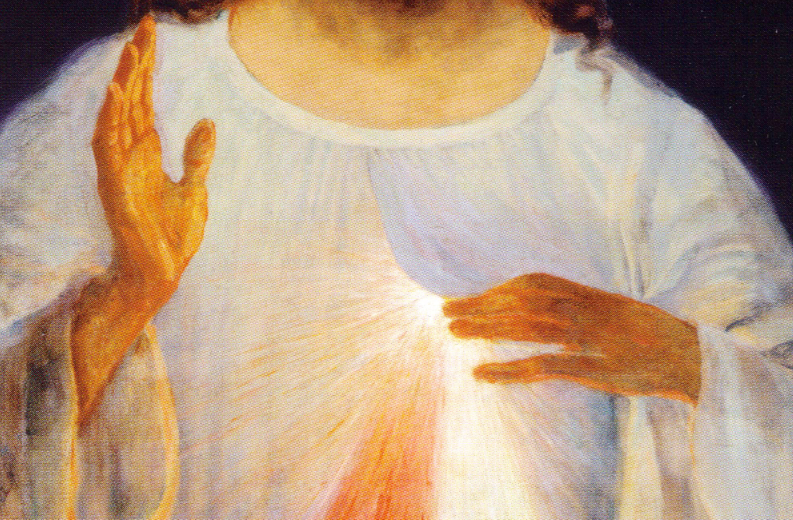 The whole image is symbolic of charity, forgiveness and love of God, referred to as the “Fountain of Mercy”.

This means the painting is energetically active, like a fountain spewing Divine Love. Jesus has poured his Spirit into the canvas so that it may be sprayed into the space in which the painting is displayed. Your cell phone, tablet or computer is transformed into a sacred space via the presence of the image.

Jesus is talking about alchemy here as red and white are also the color of the elixirs of alchemy and transmutation. Mixing their rays represents the “(al)chemical wedding” that produces the Philosopher’s Stone or the Body of Light.

I offer these details about this image as, once again, according to Arthur Roche, the Secretary of the Congregation for Divine Worship, the Church hopes that Mary Magdalene’s ascension will “reflect more deeply on the dignity of women, the New Evangelization, and the greatness of the mystery of Divine Mercy.”

At the heart of this mystery is Jesus’s resurrection and transformation into a radiant light being.

My hope is that this “new reflection” on Magdalene will focus on her esoteric side and her role in the Resurrection.

Mary Magdalene was the beloved of Jesus, probably his wife.  She was his supreme initiate. This is why she was the first to the tomb in which his crucified body laid on a stone awaiting Resurrection.

Having spent the past 30 years studying the Resurrection of Jesus, I can say there is no more important participant than Mary Magdalene.

In my book, The Illuminator, I explored the research uplifting Mary Magdalene as an alchemist for which the popular thirteenth century French chronicler Jacobus says she earned the distinction Illuminata and Illuminatrix – the Illumined and Illuminator.

Webster’s says illuminati literally meant ‘enlightened ones’ in Latin. It comes from illuminare, to light up.

Glorify also means apotheo-size, to raise-up, to make one a God.

All the occult mysteries of Arcanum speak of a key that is required to unlock mystical secrets of enlightenment and the body of light.

The lost secret of the Arcanum is about building the light body through the release of secretions or oils from the astounding manufacturing plant of spiritual oils, the human brain.

This oil or essence was the key secret of Mary Magdalene and is the key to Arcanum. 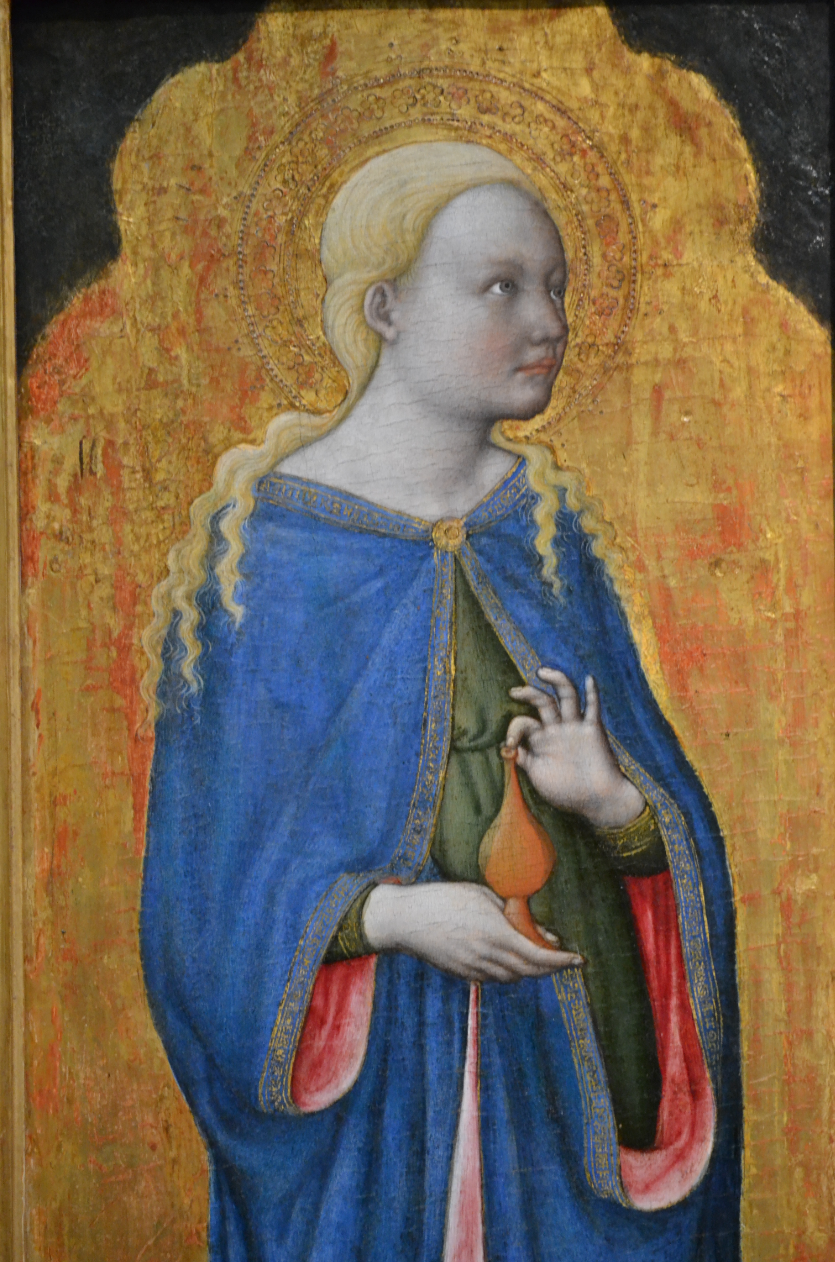 Jewish Gnostics, who recorded their beliefs in the Gospel of Philip, say the Magdalene’s sacred oil is called Chrism that produces the Resurrection.

In Gustave Moreau’s painting we see Mary Magdalene cradling Jesus, perhaps in the moment after she has anointed his body with the sacred oil seen on the table beside them. 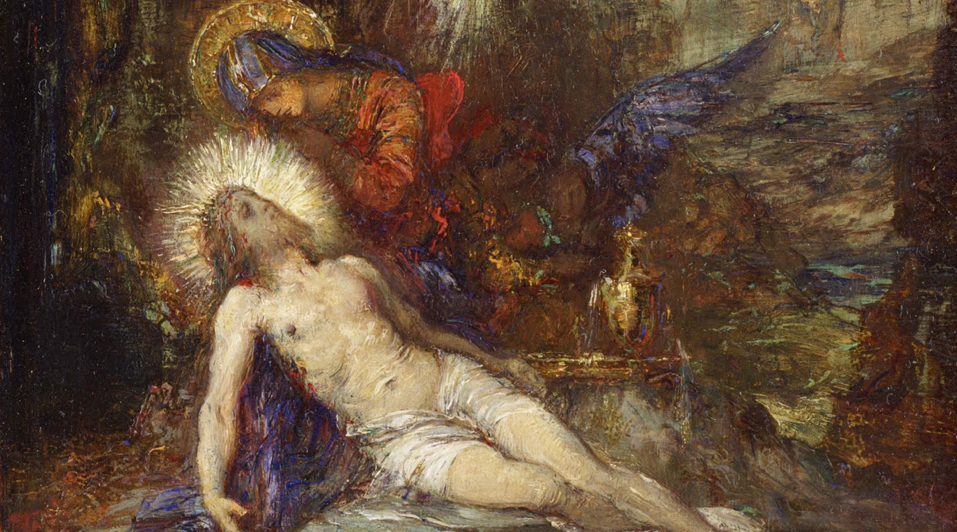 This oil opened one’s spiritual eyes, but it may have done more.

In ARCANUM, Clare and I made the first ever proposal that Mary Magdalene knew the secret of attaining what the Tibetans call the Rainbow Light Body or what Christianity calls the Resurrection body. In this practice the body is dissolved into light. The Tibetans do not mention an oil as instrumental in its attainment. Our sense is that this was an innovation introduced — or perfected by — Mary Magdalene. 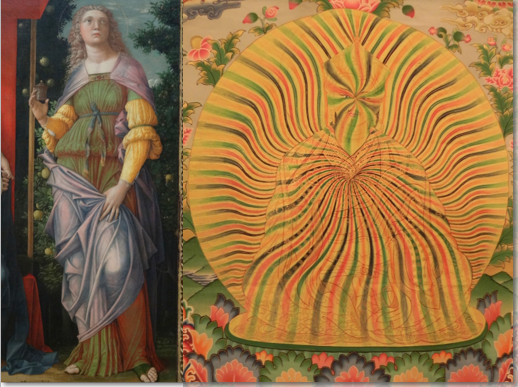 Mary Magdalene wears a cloak of many colors and holds her alabaster jar. Does it contain the oil that transmutes the human body into light? I believe so.

I note this not out of ego, but to let the interested reader know the source of this information and to invite you on a spectacular journey. We have much more evidence to back up our claim than we are presently allowed to put in print, but will be sharing at our upcoming events and tours.

It is our hope that other researchers, presenters and authors on the subject of light body transformation and ascension will walk with us and further explore the astounding way ahead as we further uncover Mary Magdalene’s knowledge of the Light Body.

The Gospel of Mary says Mary Magdalene was given a special transmission of knowledge (gnosis). This transmission came after Jesus’ resurrection and concerned the nature of matter, of salvation, and of the soul’s journey through the darkness of the astral planes to reach the realm, kingdom or empire of light (which may well be the center of our galaxy).

From St. Faustinas’s experience I have no doubt part of Jesus’s instructions concerned the power of sacred art. Now, the question is, how can the sacred art trigger the production of the oil within us?