HAIL TO THE STONE OF RESURRECTION : NATGEO TO REVEAL BURIAL STONE OF CHRIST?

October 27, 2016. With an awful lot of “Christian tradition says,” “it is believed” and “could it be?” caveats, National Geographic has released photos of the top of the burial tomb containing the “stone slab” upon which Christ resurrected. This was last seen nearly 500 years ago.

Located in the Church of the Holy Sepuchre, the most holy of holies of Christianity, in the Christian Quarter of the Old City of Jerusalem, this is the site, known as Golgotha, the skull, where Jesus was crucified. It has been a major Christian pilgrimage destination since the fourth century. 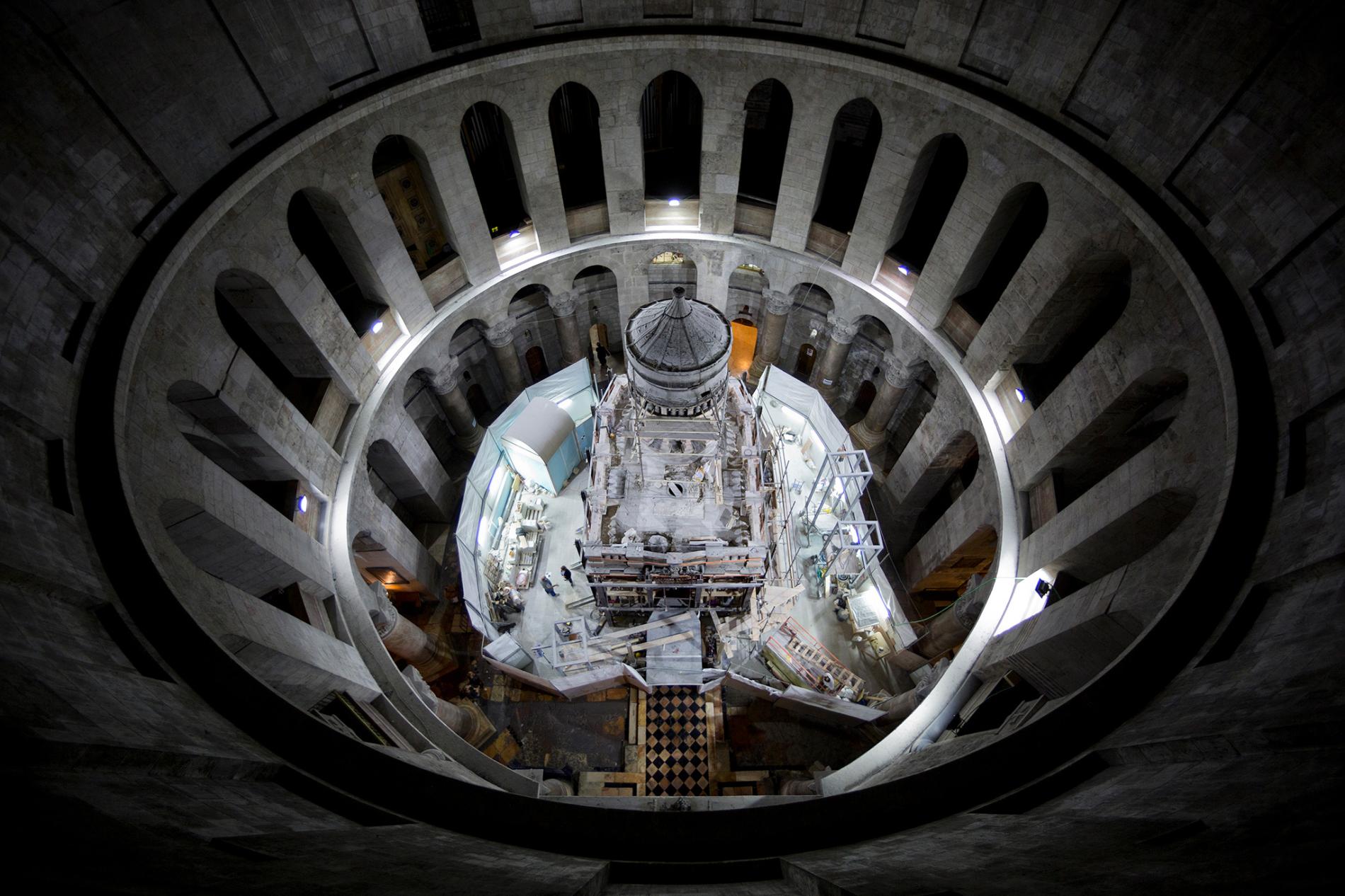 The shrine that houses the traditional burial place of Jesus Christ is undergoing restoration inside the Church of the Holy Sepulchre in Jerusalem.Photograph by Oded Balilty, AP for National Geographic

The ‘empty tomb’ has been covered by marble cladding since at least 1555, when it was renovated by Franciscan friars, and probably a lot longer.

“The marble covering of the tomb has been pulled back, and we were surprised by the amount of fill material beneath it,” said Fredrik Hiebert, archaeologist-in-residence at the National Geographic Society, a partner in the restoration project. “It will be a long scientific analysis, but we will finally be able to see the original rock surface on which, according to tradition, the body of Christ was laid.”

I have been waiting or this moment for years…Ever since physicist Frank Tipler proposed the insanely fantastic (some say “kooky,” “crack pot” and “completely ridiculous”) idea that with a neutrino gizmo we could detect the neutrino trail left in the stone slab by Jesus during His resurrection (transmutation into Light) and thereby scientifically prove it happened…and recreate it.

All we need to do is create this gizmo, and even more impossible, get close enough to the Stone to follow the trail.

The present Stone of Anointing marks the place where Jesus’s body was prepared for burial by Joseph of Arimathea. It was placed here in 1810.

The real Stone of Resurrection is, presumably, under the marble. The trouble is, no one could get under there. 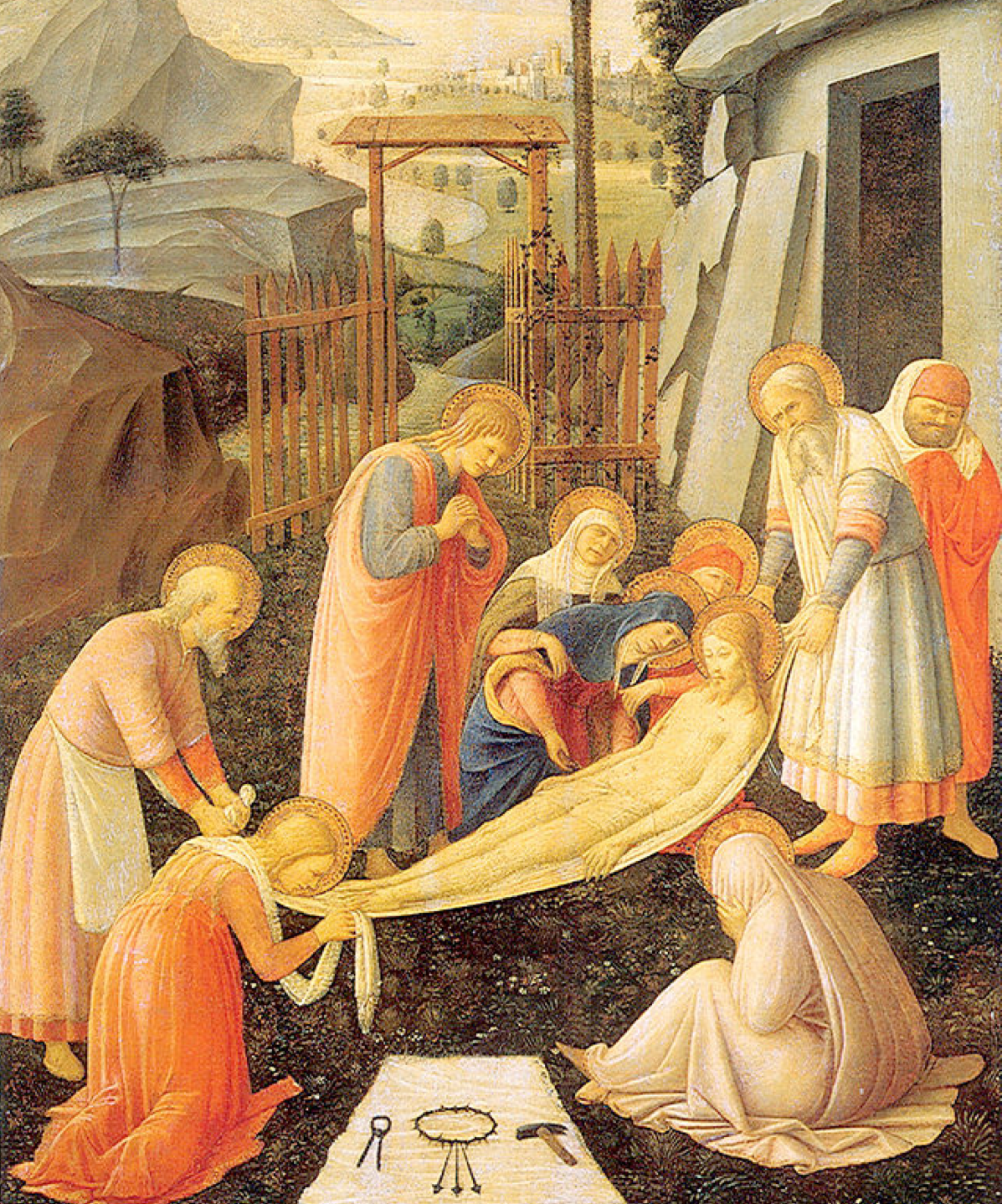 In Fra Angelico’s painting we see a luminous Christ laid on a linen shroud. Tools are arranged on another linen cloth in the foreground.

So, you can imagine my excitement this morning when I read about the Rupert Murdoch-owned National Geographic’s plunge into Revelation.

We are talking about a first time in centuries look at the Stone that is the symbol of the ultimate human victory and also entitles a special ‘open sesame’ into the gates of heaven.

Says NatGeo: “The exposure of the burial bed is giving researchers an unprecedented opportunity to study the original surface of what is considered the most sacred site in Christianity. An analysis of the original rock may enable them to better understand not only the original form of the tomb chamber, but also how it evolved as the focal point of veneration since it was first identified by Helena, mother of the Roman emperor Constantine, in A.D. 326.” 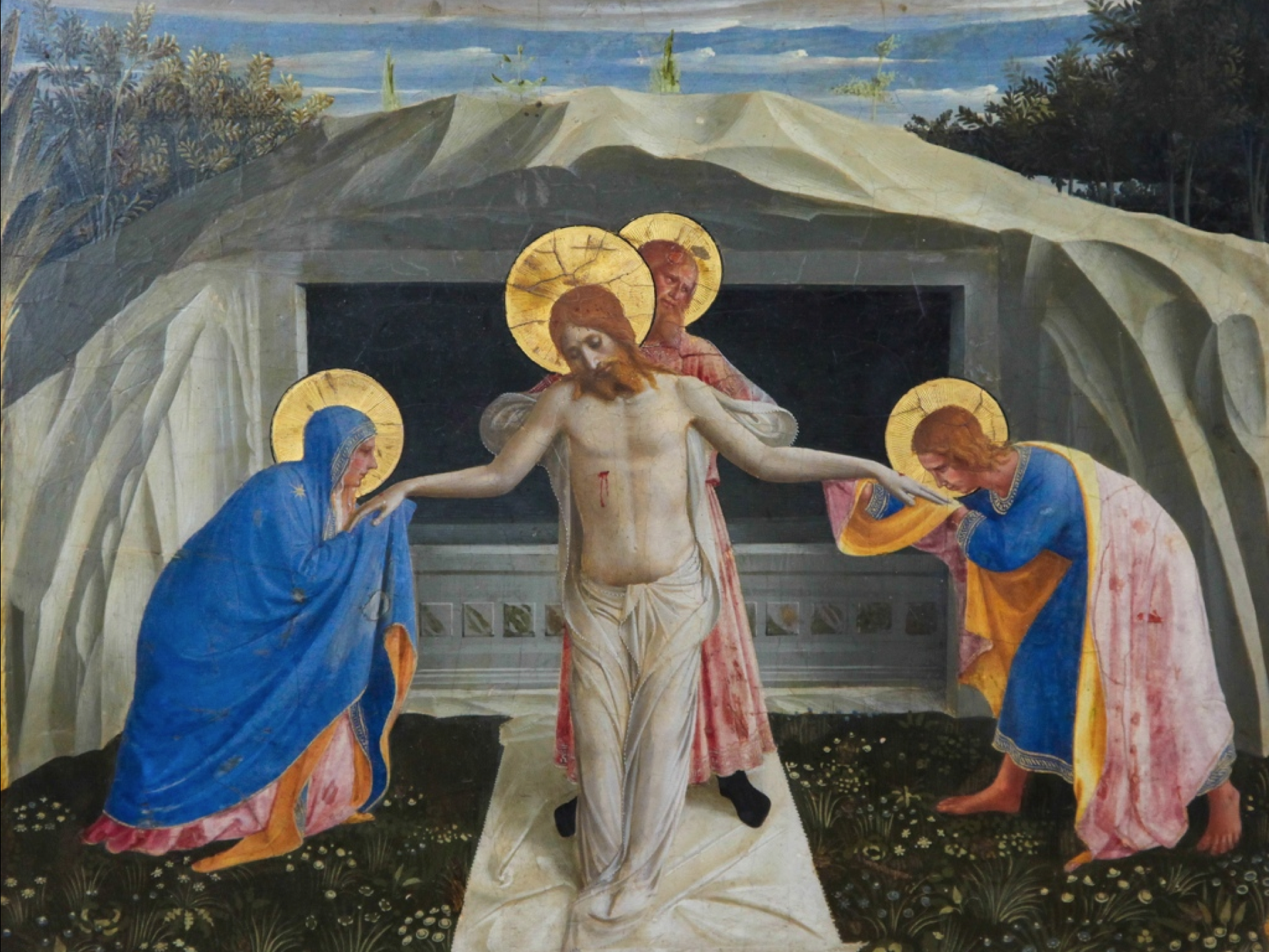 In Fra Angelico’s “Resurrection from the Tomb” we see the resurrected Christ rising from the Shroud.

Is it possible that we will be able to experience the profound heart-Light of the universe recorded in this stone?

But we better hurry up.

UNESCO has just passed another resolution denying Christian and Jewish connections to the Temple Mount in Jerusalem. They have declared it to be exclusively Muslim even though Islam began some six hundred years after Christianity and  2400 years after Judaism (and that was in Saudi Arabia not in the Land of Israel). The move prompted Israel to cut ties with UNESCO.

What the UN agency is saying is that Jesus (or any Jew or Christian), had no connection to the Temple of Solomon and the other sites on the Temple Mount.

If Jesus did not teach in Solomon’s Temple in Jerusalem – the Temple – then where was he?

Some worry that it won’t be long before the Holy Sepulchre is declared another Muslim Holy site and off limits to all but the people of the Book.

Let’s get back to the Stone and why connecting with it is so important.

The answer has to do with the Shroud of Turin.

It was Joseph of Arimathea who provided the linen shroud in which to wrap the body of Jesus. It was he who asked Pontius Pilate for permission to remove the body of Jesus from the pillar / cross of Crucifixion. It was his tomb into which the body was laid…and NatGeo is poking around.

57 As evening approached, there came a rich man from Arimathea, named Joseph, who had himself become a disciple of Jesus. 58 Going to Pilate, he asked for Jesus’ body, and Pilate ordered that it be given to him. 59 Joseph took the body, wrapped it in a clean linen cloth, 60 and placed it in his own new tomb that he had cut out of the rock. He rolled a big stone in front of the entrance to the tomb and went away.

NatGeo claims it has uncovered the original surface of this tomb.

Titian shows Jesus being placed in the stone tomb. His body is on Joseph’s linen Shroud. Joseph of Arimathea, Nicodemus and the Virgin Mary take Christ in the tomb watched by Mary Magdalene and Saint John the Evangelist. Titian – Prado

The Gospels of Mark and Matthew both mention that the body of Christ was placed in a tomb that “had been cut out of rock”.

Jesus resurrected from this stone. 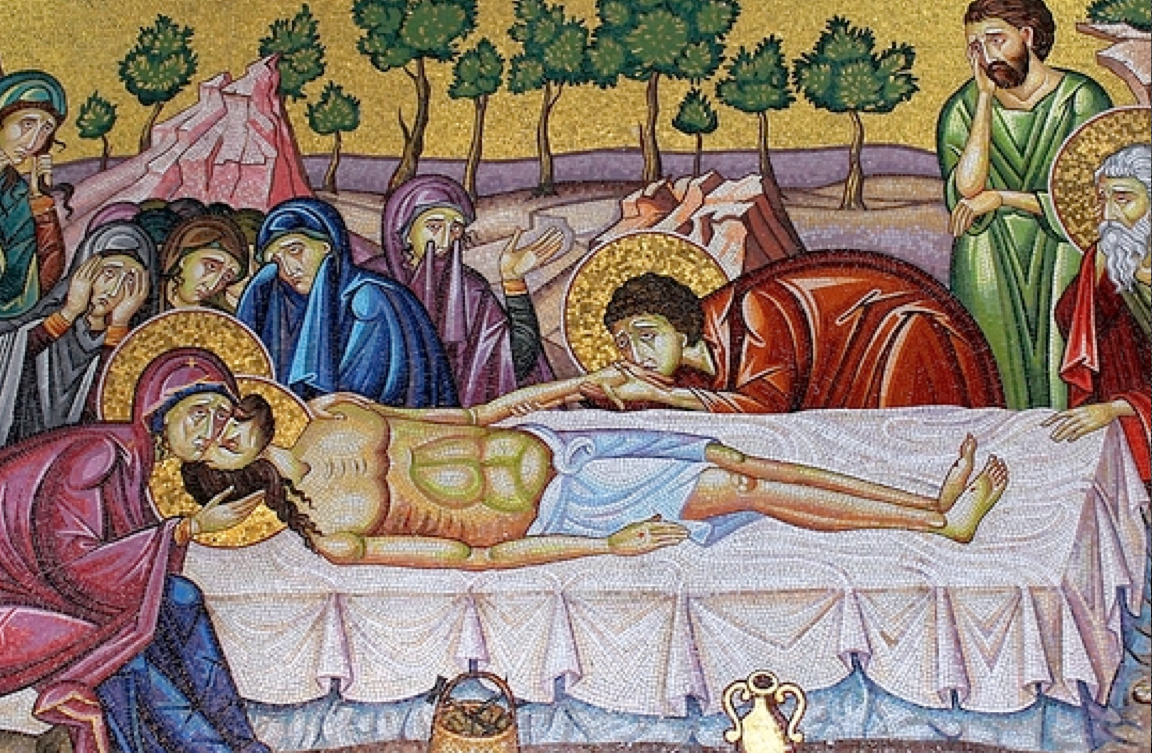 At the entrance to the church of the holy sepulchre is the Stone of Anointing. This is where the body of Jesus was laid in preparation for his burial after his body was taken down off the cross.

“Then took they the body of Jesus, and wound it in linen clothes with the spices, as the manner of the Jews is to bury” (John 19:40).

The linen cloth Jesus is laid upon is the Shroud of Turin.

According to Eusebius of Caesarea,  in the 2nd century AD the Roman emperor Hadrian built a temple dedicated to the Roman goddess Venus in order to bury the cave in which Jesus had been resurrected.

The first Christian emperor, Constantine the Great, ordered in about 325/326 that the temple be replaced by a church. During the building of the Church, Constantine’s mother, Helena, is believed to have rediscovered the True Cross, and a tomb (although there are some discrepancies among authors).

In the early 13th century Grail Myth, which began to circulate in the West shortly after the first Crusades the German poet, Wolfram, said the Holy Grail is a sacred stone.. More,  this stone box is considered to be a translucent gem.

Light penetrated this gem and passed through it.

Christ rose from this gem / stone. 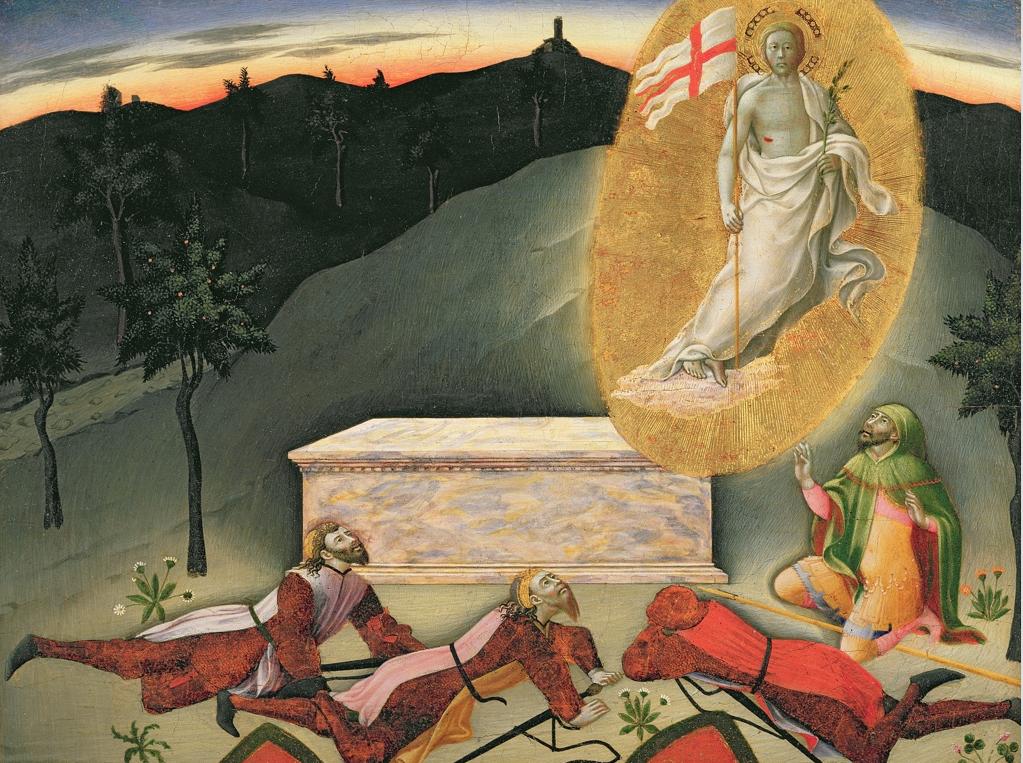 The stone enclosure of Christ’s grave was the Crusader’s hope of heaven, their phoenix stone, hope for the forgiveness of sins, the goal of their quest, of their pilgrimage, and ultimate assurance of arrival at the Gate to Paradise. 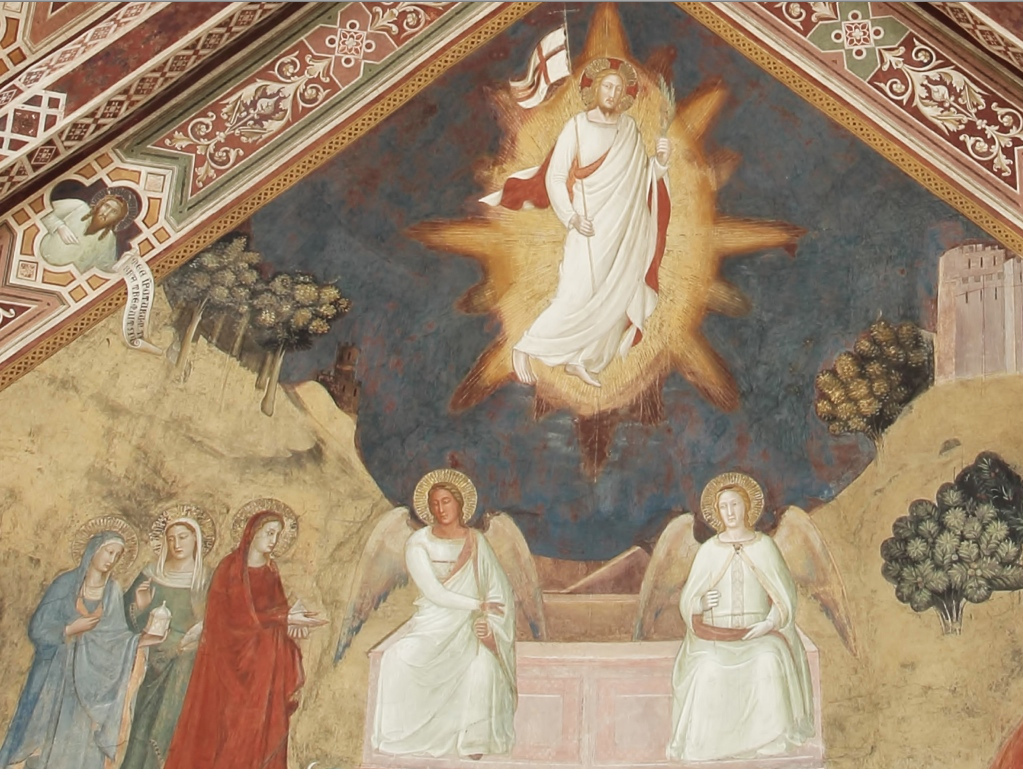 The Book of Isaiah has many references to the Messiah to come. In several places He is referred to as “the Cornerstone,” such as in Isaiah 28:16-17: “So this is what the sovereign Lord says: ‘See, I lay a stone in Sion, a tested stone, a precious cornerstone for a sure foundation; the one who trusts will never be dismayed. I will make justice the plumb line line and righteousness the measuring rod.” 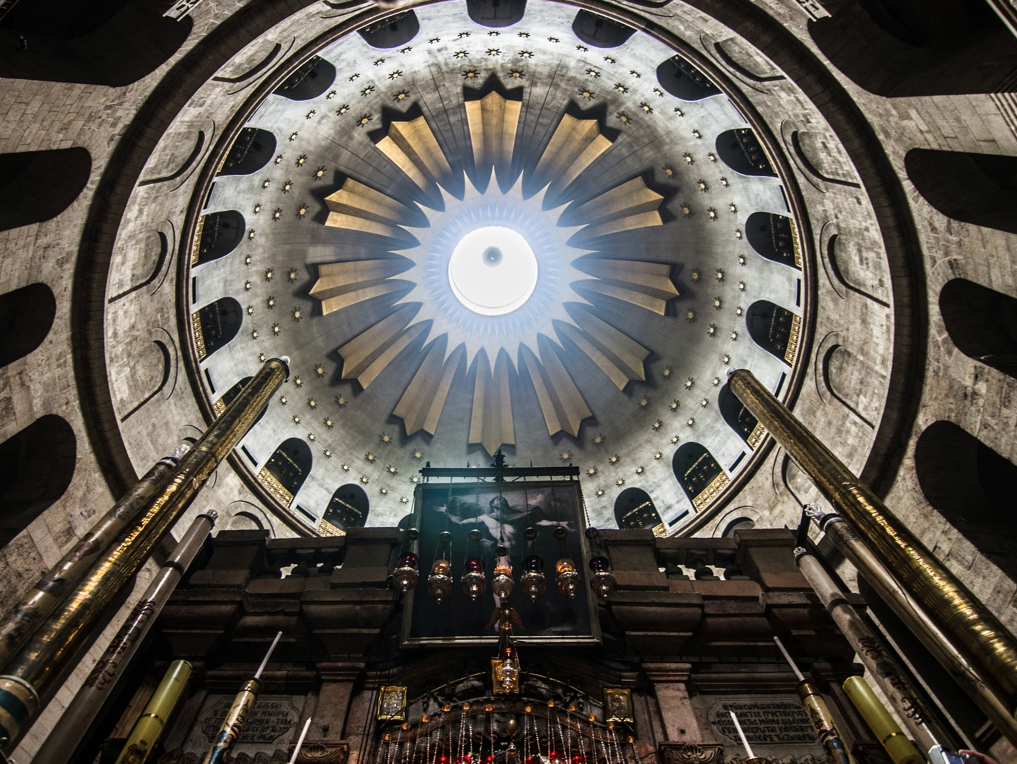 Today’s dome of the church of the Holy Sepulchre, Jerusalem. The portal / stargate imagery is as obvious as it is fantastic. 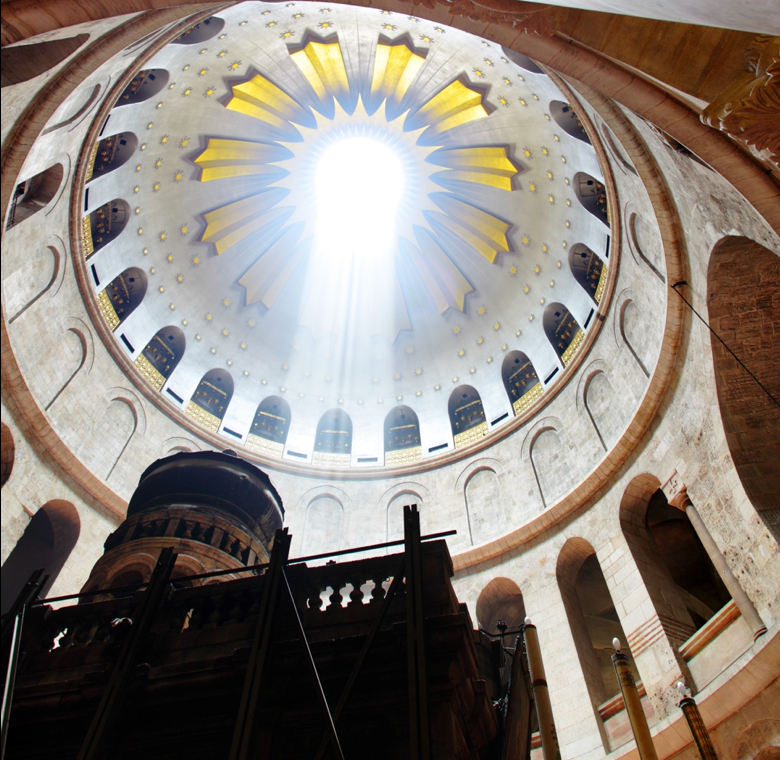 Directly above the Catholicon, a view of the Christ Pantocrator in the dome of the Church of the Holy Sepulchre.

In his Grail poem, Robert de Boron describes Joseph wrapping the body of Christ in the syndone, the Shroud of linen he had bought, and then he placed the body in a stone. Then, he says, Christ was covered with a rock we call a tomb.

The Shroud reference is clear. But what does Robert mean when he says Christ was “placed in a stone” and “covered with a stone”? Is there a stone that contains something of Christ? A vibration perhaps?

That Stone is the stone of the Holy Sepulchre.

To me, this makes sense only if the Stone is actually a (S)tone or Vibration of Christ that is ‘recorded’ on their linen strands.

After the Templars lost control of the Church of the Holy Sepulchre — and the Stone — to Salidin in 1187 they began ‘charging’ their linen strands on a mysterious ‘head’ enclosed within a casket. This head was the face on the folded Shroud of Turin.

Are we on the verge of revealing the Stone for the first time in five hundred years?

One can only wait and wonder, but hopefully not for too much longer.