OUMUAMUA AND THE ANCIENT EGYPTIAN ASTROCHICKENS

Make no mistake. Disclosure is happening. The recent paper by Harvard astronomers, Shmuel Bialy and Avi Loeb, stating that Oumuamua (oh-MOO-ah-MOO-ah), that mysterious ‘space rock’ that flew through our solar system in 2017, is actually “a fully operational probe sent intentionally to Earth vicinity by an alien civilization” has, well, rocked the world.

I mean, let this sink in a moment.

Tow academics are talking seriously about this object being an artificial, read ‘alien’, technology.

Just 10 years ago one would be laughed or shamed out of academia for making such “crazy claims” and any news outlet short of a tabloid wouldn’t even go near such stories.

That was then. Now, Disclosure is on.

We are emerging into a new state of consciousness.

I am elated. The Oumuamua scenario fits perfectly with, if not validates, an article I wrote in 2016 about ancient Egyptian creation mythology describing something exactly like what academics speculate Omuamua is…a type of Von Neumann probe, an artificial intelligence-based space craft.

Von Neumann probes are also called “astro chickens” as they are capable of seeding a planet with an “egg” with all biological and other material necessary for life. As Freeman Dyson proposed, they are part biological, part artificial intelligence.

Instead of sending humans into to space, a hypothetically advanced civilization would send an astro chicken probe packed with all that is necessary to seed life. The ‘chicken’ probe seeks a habitable planet, and upon discovering a new ‘nest’, it lands, lays an egg, and out pops civilization.

In my  2016 article, “Ancient Alien (Artificially Intelligent) Astro Chickens, Self-Replicating Robots and the Ancient Egyptian Island of the Egg”, I compared the theory about astro chickens to the ancient Egyptian creation myth from the temple of Horus at Edfu.

The Edfu Texts tell the story of non-physical beings, the Lords of Light, who came from out of the blue to create a sacred island called “the Island of the Egg” in ancient Egypt. It became the resting place and operational center of the creator of the world. It is also thought of as the nucleus, the egg, from which all creation on Earth grew.

As the story tells us, the Island of the Egg suffered a cataclysm. Before it ‘sank’ elite priests were able to secure a technology called ‘the relic’. After the cataclysm they retrieved the ‘the relic’ and rebuilt civlization.

The 2016 article was a revisiting of my 2006 book, “Starwalkers and the Dimension of the Blessed,” in which I first discussed how the Edfu Texts were the source material for Plato’s Atlantis story. NatGeo followed me to Edfu in 2007 for an episode of its whopper of a series  Is It Real: Atlantis?

Revisiting my work on the Edfu texts in 2016, I was shocked and excited to discover how the Edfu story perfectly matches with the concept of self-replicating, artificially intelligent robot seeder ships and astro chickens.

I find it highly interesting that Oumuamua shows up at precisely the cosmic moment when we can comprehend what it is.

Here is a brief timeline that will prepare you to read my “Ancient Alien Astro Chickens” article.

LOOK, IN THE SKY

Oumuamua is the first interstellar object detected passing through the solar system.

This mysterious visitor was first observed by astronomer Rob Weryk in October 2017 using the Pan-STARRS telescope at Haleakala Observatory perched atop a volcano in Hawaii. Sorting through the data he detected an odd, rapidly moving oblong or cigar-shaped object going zoomy, zoomy through our backyard.

On October 19, 2017 Weryk and his colleagues raised the “what the bleep is it?” flag when they made the announcement: they had seen, for the first time, an object from another solar system.

According to Karen Meech, an astronomer at the University of Hawaii Institute of Astronomy, whose team discovered Oumuamua, they briefly called the visitor Rama, after the cylindrical space craft that passed through the solar system in Arthur C. Clarke’s 1973 sci fi novel, Rendezvous With Rama.

To honor the Hawaiian roots of the discovery they named it Oumuamua instead.

The name comes from the Hawaiian ʻoumuamua, meaning ‘scout’ (from ʻou, meaning ‘reach out for’, and mua, reduplicated for emphasis, meaning ‘first, in advance of’.

The name emphasizes the way this object is like a scout or or messenger sent from the distant past reaching out to humanity.

Oumuamua, the Messenger, had arrived. 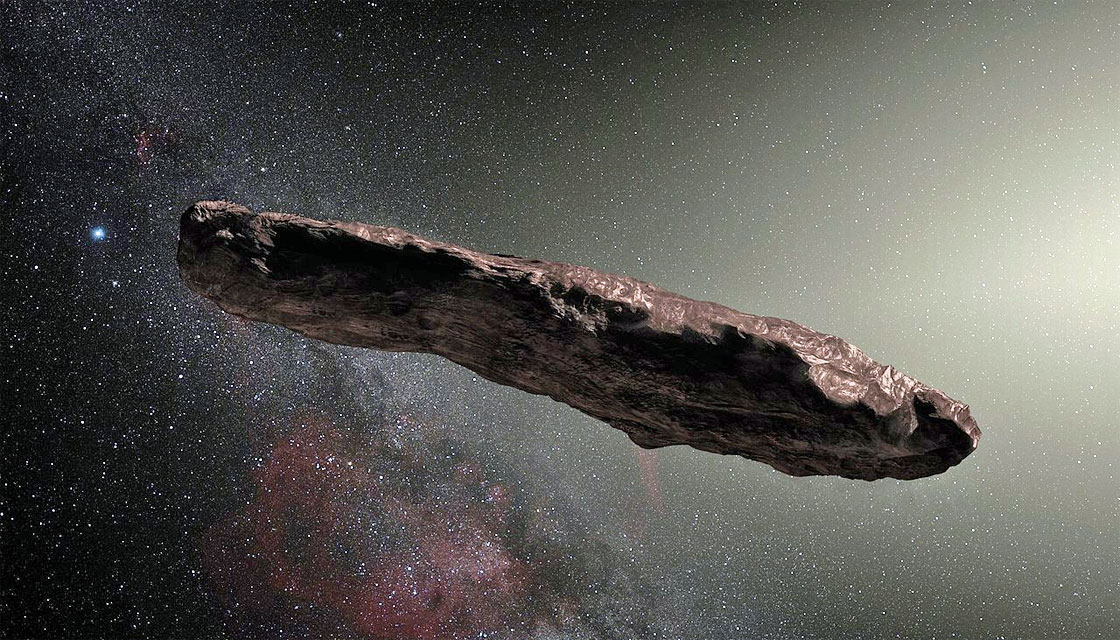 But, what was its message?

Because of its high speed (196,000 mph, or 87.3 kilometers per second) and the trajectory it followed as it whipped around the Sun, scientists were confident Oumuamua originated beyond our solar system.

Also, because of its speed, they knew they had less than a week to study it.

A frenzy erupted for time at the world’s in demand, long ago booked, telescopes.

Observatory directors at six of the world’s leading observatories dropped everything to train their eyes at Oumuamua.

By November 2017 NASA revealed several oddities about our space visitor.

(This wobbling is referred to as “excited rotational state.” While it is rotating around its short axis, it is also rolling along the long axis, AND bobbing up and down…the result of being violently emitted from its home solar system.)

These bizarre characteristics have raised eyebrows among professional practitioners.

Scientific American was actually the first to drop the ‘Oumuamua is an alien probe dime’, doing so in its December 11, 2017 article, “Alien Probe or Galactic Driftwood. SETI Tunes In To Omuamua.”

SETI, the search for extraterrestrial intelligence, uses large radio telescopes to listen for interstellar radio transmissions from other cosmic civilizations.

They wondered the wondrous question. If ‘Oumuamua is in fact artificial (meaning it is an alien technology) is it transmitting or at least leaking radio waves?

Could Oumuamua be some kind of alien space craft?

Just looking at its shape reminds us of those famous cigar-shaped craft people have been reporting seeing for decades.

They point out that the cigar shape also makes sense for an interstellar spacecraft looking to reduce friction and damage from the abundant gas and dust floating between stars.

SETI did the experiments to search for those radio signals you would expect to detect coming from such a craft.

Unfortunately, observations of ‘Oumuamua, using facilities such as the SETI Institute’s Allen Telescope Array,  turned up nothing.

Still, the wondrous on the quest for the secrets of Oumuamua kept wondering.

Could Oumuamua be an artificial alien technology?

Scientists from Breakthrough Listen, a project funded by Russian billionaire Yul Milner in partnership with Stephen Hawking, which listens for evidence of civilization beyond Earth, had this thought. The statement from Breakthrough Listen notes the importance of Oumuamua’s cigar shape saying: “Researchers working on long-distance space transportation have previously suggested that a cigar or needle shape is the most likely architecture for an interstellar spacecraft since this would minimise friction and damage from interstellar gas and dust.”

On December 11, 2017 they pointed their listening devices at the visitor ‘space ship’ for ten hours hoping to hear it, or its alien pilots, sending and receiving communications from its home base (somewhere in the direction of Vega in the Lyra system is the likely candidate).

Yes, Vega is the same star system written about by Carl Sagan in Cosmos as the source of a Stargate technology beamed to earth.

Breakthrough Listen claimed they could detect a signal the strength of a cell phone coming out of Oumuamua.

Silence was all that came back, least on the frequencies they checked and with current technology).

No signs of aliens aboard.

The alien space rock story went quiet as it space-trucked out of our solar system in January 2018.

All was quiet on the Oumuamua trail…

On April 1, 2018 The Astrophysical Journal Letters reported a new analysis of more than 800 telescopic observations suggests that our first known interstellar visitor may not be cigar shaped as thought. Instead, it could have the shape of a flattened disk!

Oumuamua could most certainly be cigar shaped, but it could actually also be pancake or UFO shaped!

Astronomer-artist William Hartmann took a stab at depicting the pancake scenario in the painting found in this Sky and Telescope article. 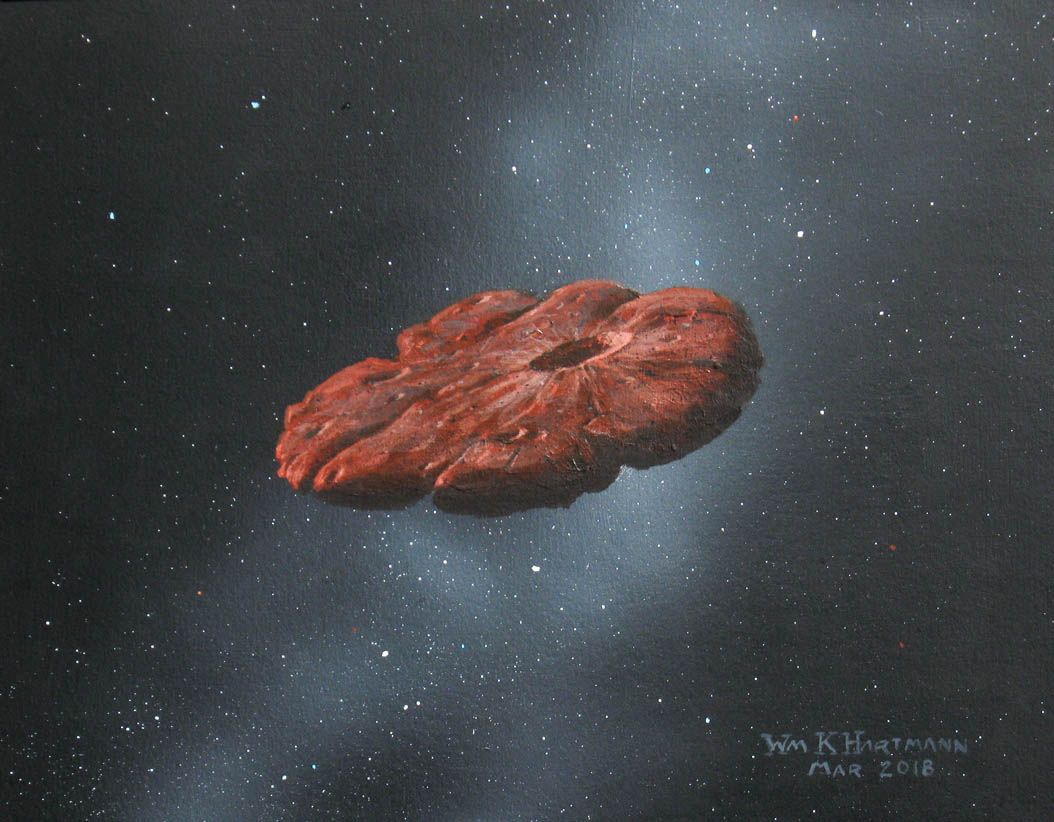 His painting looks like the saucer section of the USS Enterprise caked in mud. Are the big brains at NASA asking us to read between the lines here? 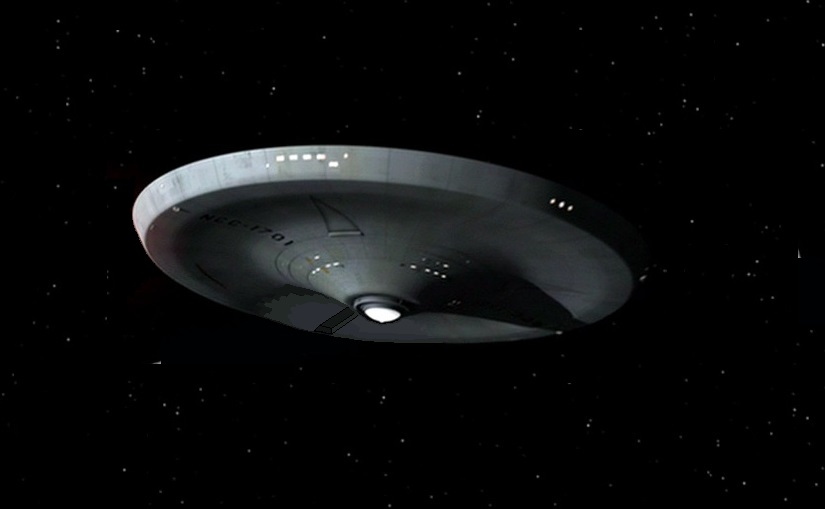 In June 2018 scientists proclaimed Oumuamua was a comet after all.

The story was sorted…Or, so they thought.

In June 2018 NASA announced that Omuamua was unexpectedly speeding up, and scientists don’t know why.

NASA said observations from their Hubble Space Telescope have confirmed Oumuamua, has had an “unexpected boost in speed and shift in trajectory as it passes through the inner solar system.”

Marco Micheli of ESA’s (European Space Agency) Space Situational Awareness Near-Earth Object Coordination Centre in Italy said: “Our high-precision measurements of ′Oumuamua’s position revealed that there was something affecting its motion other than the gravitational forces of the Sun and planets.”

It was spinning very quickly as it flew through the solar system, and seemed to speed up rather than slow down as it left our back yard.

On November 1, 2018 Harvard astronomers Shmuel Bialy and Abraham Loeb released a paper discussing Oumuamua’s sudden acceleration. This new paper — “Could Solar Radiation Pressure Explain ‘Oumuamua’s Peculiar Acceleration?” — suggests that the reason why Oumuamua sped up is because it is equipped with what is known as a “light sail.”

A light sail is an advanced, but still theoretical, form of spacecraft propulsion that would use radiation pressure from a star to push an object along, like wind on a sailboat’s sail. If solar particles slam into the sail, it causes the sail and whatever it’s attached to to speed up.

“Considering an artificial origin, one possibility is that Oumuamua is a light sail, floating in interstellar space as a debris from an advanced technological equipment,” the paper explains, noting the possibility that it might just be a piece of alien space junk that found its way to our system. However, the team follows up with an even more wild theory, saying “a more exotic scenario is that Oumuamua may be a fully operational probe sent intentionally to Earth vicinity by an alien civilization.”

You read that correctly, the object might be “a fully operational probe sent intentionally to Earth vicinity by an alien civilization”, the researchers write.

UPDATE. 11/14/18. Dr. Loeb gave a convincing account of why he believes it is an extraterrestrial technology in this interview:

UPDATE. 12/01/18 Dr. Loeb sticks to his ‘Oumuamua is a spaceship’ story in interview with Sputnik.

The Oumuamua mystery is far from over… and what a mystery it is.

It may or may not be the first messenger to enter our solar system from afar.

As you will read in my article, ancient Egyptian civilization may have been visited by beings from another world bearing advanced technology similar to a Von Neumann probe like Oumuamua.

And it may not be the last.

As we speak, astronomers are seeking the next cosmic visitor.

In fact, in her TED talk, Karen Meech said we may be surrounded by interstellar visitors like Oumuamua and not even know it.

Leave a reply to Todd Click here to cancel the reply