THE MOST SIGNIFICANT QUESTION THERE IS

It’s December 28, 2021 and Clare and I are in Camelot, Somerset, Great Britain doing prep work for our Ascension of Avalon tour in September 2022.

For the past two weeks we have been on the trail of the Immortals of the Sheath, the Lords of Light known as the Tuatha De Danann, who made Stonehenge as a portal…and used it. These illustrious figures possessed a cloak, fog, mist or sheath called She or Sheeth, but spelled Sidhe, that gave them superpowers called Sidhe in the Vedas. The Essenes tell how Enoch visited the Stonehenge and Avebury megaliths and how he attained the Sheath via a mysterious oil. Are the Immortals of the Sheath still here? What is their oil? We will have much to say about this in April 2022.

a University of Cambridge theologian named Rev. Dr. Andrew Davison just made a big splash at the Ancient Aliens roundtable by revealing that between 2015 and 2018 NASA spent $1.1 million asking 24 theologians how the various religions would react to news of the existence of aliens or even microbial life on other planets.

Societal Implications of Astrobiology was the name of the program.

According to a preview of Davidson’s forthcoming book obtained by the Times, a “large number of people would turn to their religious traditions for guidance” if aliens were ever discovered.

This is, obviously, a no brainer conclusion…one that we have been discussing on ANCIENT ALIENS for over a decade. We have moved from wondering if God created humans elsewhere to they have always been here. The holy books of nearly all the world’s religions speak of encounters with beings not of this earth. These encounters are ongoing.

Fortunately, Davidson was only just arriving. After the splash, he spun the table with a very powerful question. In fact, it is ‘the most significant question there is’, in his opinion.

What is the most significant question there is? In Davidson’s view, the answer is “is probably whether one would respond theologically to the prospect of life elsewhere in terms of there having been many incarnations, or only the one theologians talk about in Jesus.” 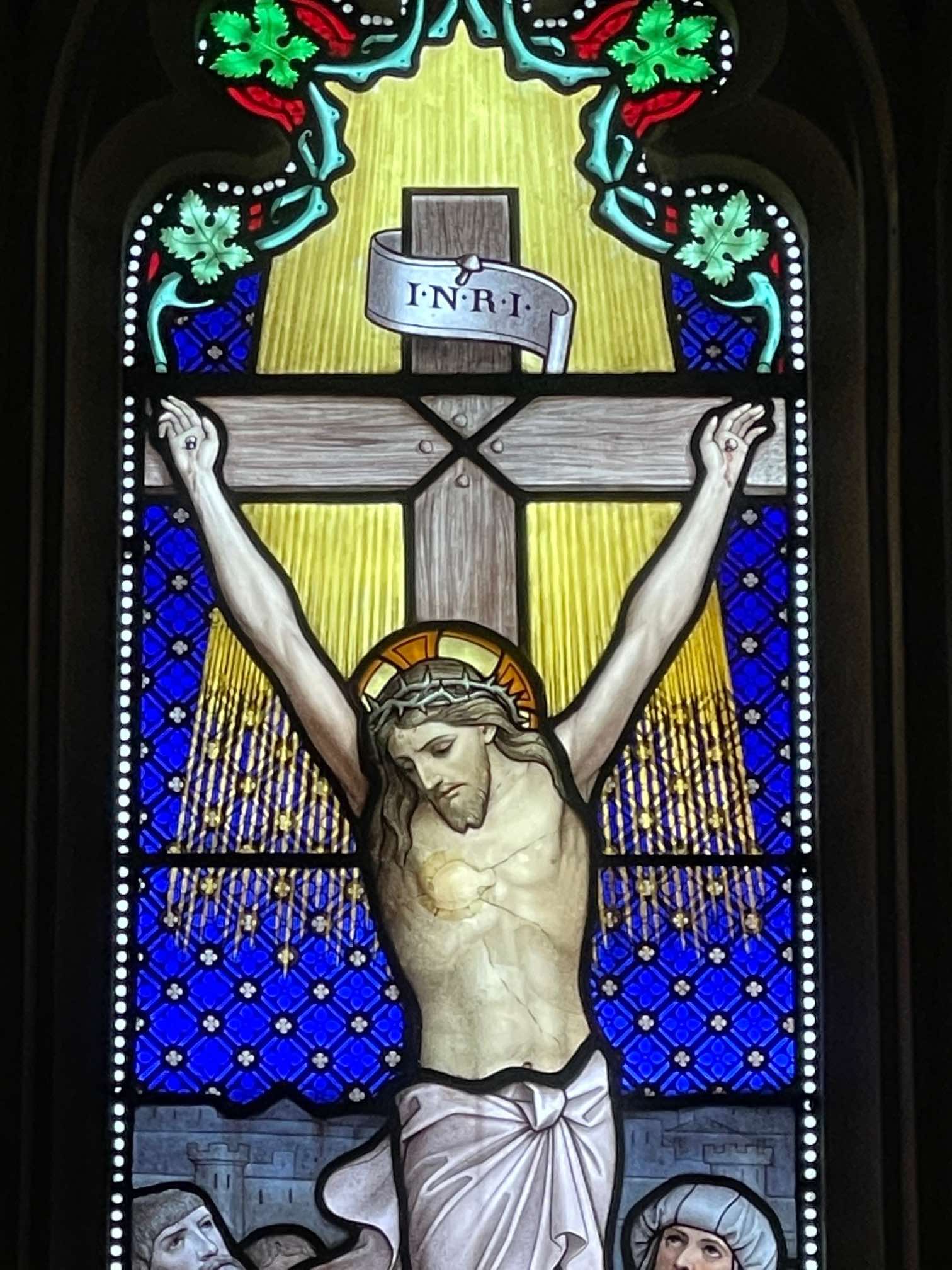 The Crucifixion of the Light at the Church of St. Michael, Compton Pouncefoot, Somerset. 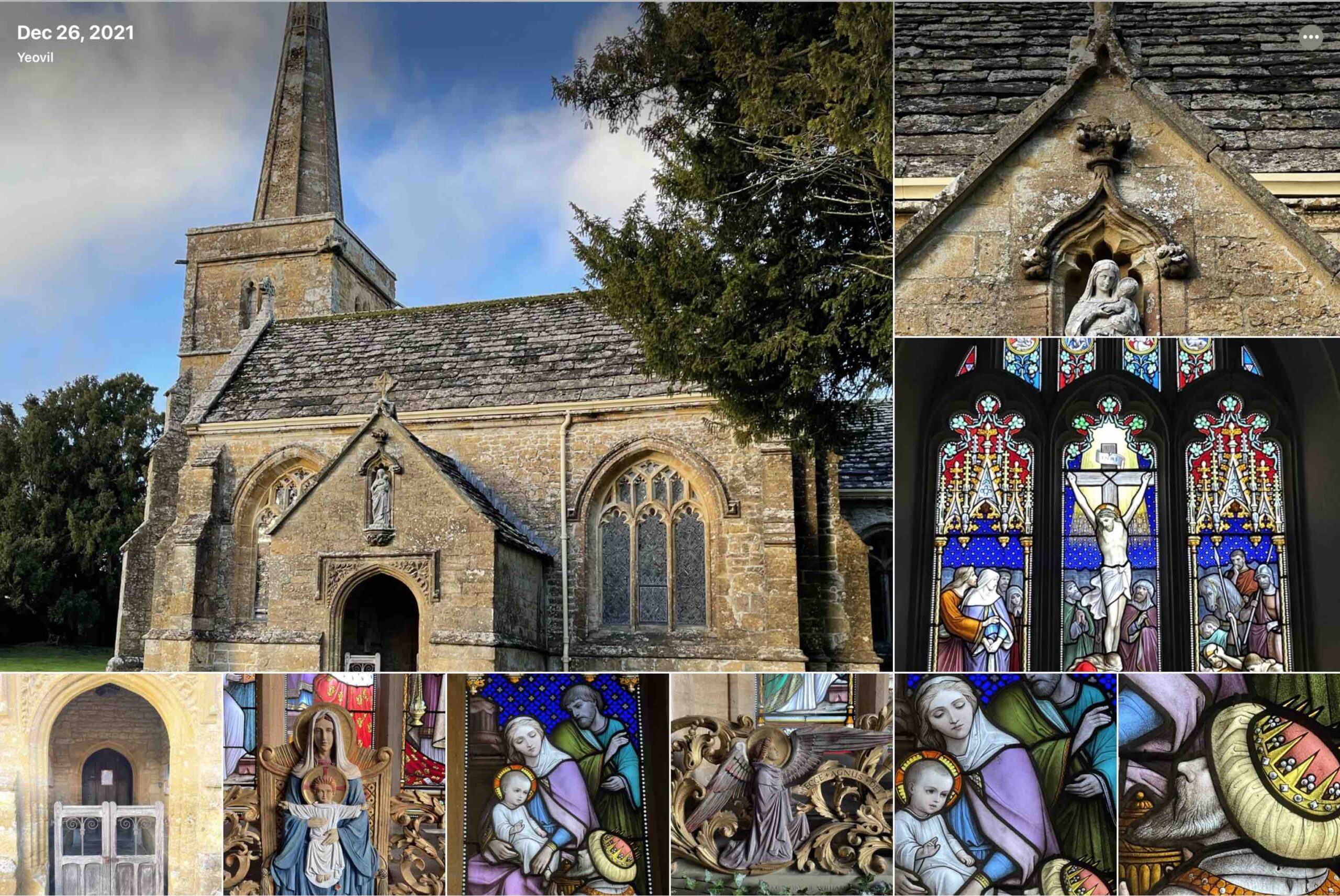 Compton Pouncefoot. One of the ‘Camelot Churches’ Clare and I came to investigate.

In Christian theology, it is believed that everything in God’s creation is perfect, except for humans. We are sinners. This makes us unlike anything else in the universe.

Another way of looking at this is found in Romans 3:23, which says:

This means sin is everywhere in the universe and everyone, everywhere is involved in a restoration or redemption process.

Is Jesus hopping from planet to planet, galaxy to galaxy, redeeming the fallen?

If so, how does he go hop hop?

Was Jesus also sent to these alien worlds to redeem souls there or just to our world?

Or, are there multiple Christs?

Or, by redeeming humanity on earth, did it have an immediate effect on all souls throughout the universe?

Can events on earth have an effect throughout the universe?

Have you ever heard someone pray “God’s will be done on earth as it is in heaven”? This is part of the Lord’s Prayer given by Jesus during his signature quantum teaching otherwise known as the Sermon on the Mount (Matthew 5-7). It affirms that events on earth are entangled with events in heaven and vice versa. Everything is connected.

Jesus directly states his cosmic origin (and our essential cosmic predicament) when he proclaimed:

He is very clearly stating that he is from another world. And ours is a lower world.

Some may be surprised to learn that, in addition to upper and lower worlds, the Bible says there are those that are visible and those that are invisible. More, they are inhabited.

These thrones are also known as Ophanim which in appearance are wheels with eyes staring all around the rims and their function is to be the wheels for the Lord’s Heavenly Chariot (Merkabah). These angels are also referred to as “many-eyed ones” and are the most common depicted example of biblically accurate angels (or aliens). 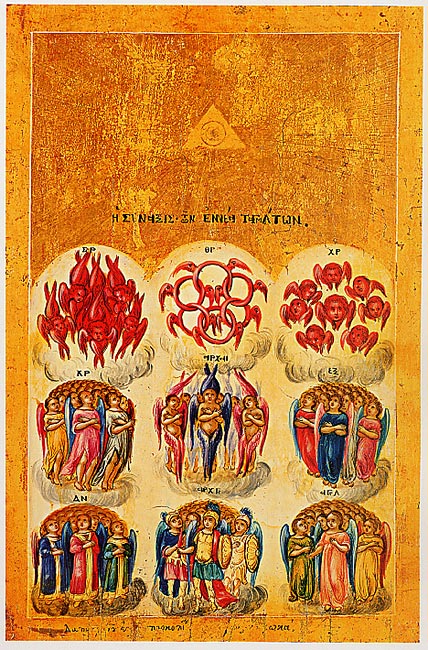 The nine choirs of angels.

It was Plato who gave the world the conception of forms or ideas. For him the unseen world was the real world. In it there were laid up the forms, the ideas, the perfect archetypes and patterns of which everything in this world is a pale and imperfect copy.

To put it at its very simplest, there is in the unseen world a perfect idea of a chair of which all man-made chairs are imperfect copies. This world of space and time is not the real world, the things which we can see and touch and handle are not the real things.

The real world is the invisible world beyond.

Philo believed that God created the unseen world first with all its perfect patterns, and then created the visible world as a copy of the unseen (Concerning the Creator of the World 16).

In the Letter to the Hebrews there is a direct echo of this when the writer speaks of the Temple in Jerusalem as being “a copy and shadow of the heavenly sanctuary”, and when he recalls how Moses was instructed to make everything according to the pattern shown to him on the heavenly mount (8:5).

The existence and reality of the heavenly realm, specifically a heavenly sanctuary, is clearly described in the Old and New Testaments. The centuries old beliefs held by Jewish mystics about this ethereal place became the basis for the early Christian beliefs as found in the books of Hebrews and Revelation.

In the book of Hebrews, Jesus is introduced as “a minister in the sanctuary and the true tent which is set not by man but by the Lord (Hebrews 8:2).

The heavenly sanctuary is considered to be a real place. It is inhabited by angels gathered in joyful assembly and just humans made perfect.

Therefore, Christ, the image or icon of the invisible God made manifest in our visible world, embodied in a genetically-engineered, spiritually-modified, human-alien hybrid body (Luke 1:35)  to teach humans a lesson of love, tolerance (Mark 12:31), resurrection (John 11:25-26) and human transformation (John 14:12). The purpose of this Incarnation was to redeem humanity. To return the fallen to the world above or, rather, in the invisible realm.

This is the premise of Hebrews. Jesus came from this superior, original, place. “We have a great high priest who has passed through the heavens,” says Hebrews 4:14 and who “his able for all time to save those who draw near to God though him, since he always lives to make intercession for them” (Hebrews 7:25).

As he did on earth, he could have done anywhere.

Think about this in terms of what we know about the existence of parallel dimensions and dark matter.

The idea that all things that are visible originated in the invisible realm is pure, “weird,” quantum physics.

This is provocatively affirmed in Hebrews 11:3,

By faith we understand that the universe was created by the word of God, so that what is seen was not made out of things that are visible.

HOW TO GET ABOVE AND BEYOND HUMAN?

Enfolded within these questions is an even more significant one that NASA should, or perhaps, already has addressed (and Clare and I invite you do discuss in Nashville April 9-10, 2022).

This even more most significant question is can humans migrate to higher worlds or other worlds in space? If so, how? Is it the same way that Jesus travels between worlds?

In addition to my Magic Bubble is the Merkabah theory, this is something I would be very interested in discussing with Rev. Dr. Davidson at the Ancient Aliens round table.

As I recently mentioned to Dr. Avi Loeb during a conversation about The Observers, I would also very much like to discuss this with Jeff Bezos, too. Loeb sat on a roundtable discussion with Bezos about the spiritual implications of our migration into space. Bezos believes we can create a space city and humans can live in space in our flesh and blood bodies or modified transhuman bodies. This is yet to be seen.

The ancients maintained that the proper form is the born again resurrected light body, which Christ demonstrated in his Resurrection and Ascension.

The new covenant says we are in the process of transforming into the image of Christ to cross over into the invisible world.

Because we are made in the image of God we have the spiritual capacity to mirror Christ’s glory body ascension. (As do other humans in other civilizations in other worlds.)

49And just as we have borne the likeness of the earthly man, so also shall we bear the likeness of the heavenly man. 50Now I declare to you, brothers, that flesh and blood cannot inherit the kingdom of God, nor does the perishable inherit the imperishable. 51Listen, I tell you a mystery: We will not all sleep, but we will all be changed.” 1 Corinthians 15: 49-53

Here is where NASA needs to focus its attention. The heavenly man, the next human who is capable of dwelling in space, will not be wearing a space suit made by mortal human hands.

The heavenly man wears a suit made not with human hands.

How we make this is the most significant question there is.