My, things are getting very interesting, aren’t they?

Right in the middle of a global crisis, a plannedemic, the Department of Defense decides to confirm to the world that superior technology exists on this planet that is wielded by an unknown race.

On Monday April 27, 2020,  the US Navy released three video clips — “FLIR,” “GOFAST” and “GIMBAL” — on the Naval Air Systems Command website, available for the first time to download through the Freedom of Information Act.

In releasing the videos, the U.S. Navy officially acknowledges that its pilots encountered so-called unidentified aerial phenomena, according to the military news website Military.com.

FLIR, also known as the Nimitz video, shows footage taken by Navy pilots off the coast of San Diego on November 14, 2004, according to The New York Times and Vice.

FLIR has no pilot commentary but shows a dark, oblong shape being tracked by the infrared camera. At one point, the object accelerates unexpectedly to the left, causing the sensor to lose its fix on it.

“It accelerated like nothing I’ve ever seen,” one of the pilots, Cmdr. David Fravor, told The Times in 2017. 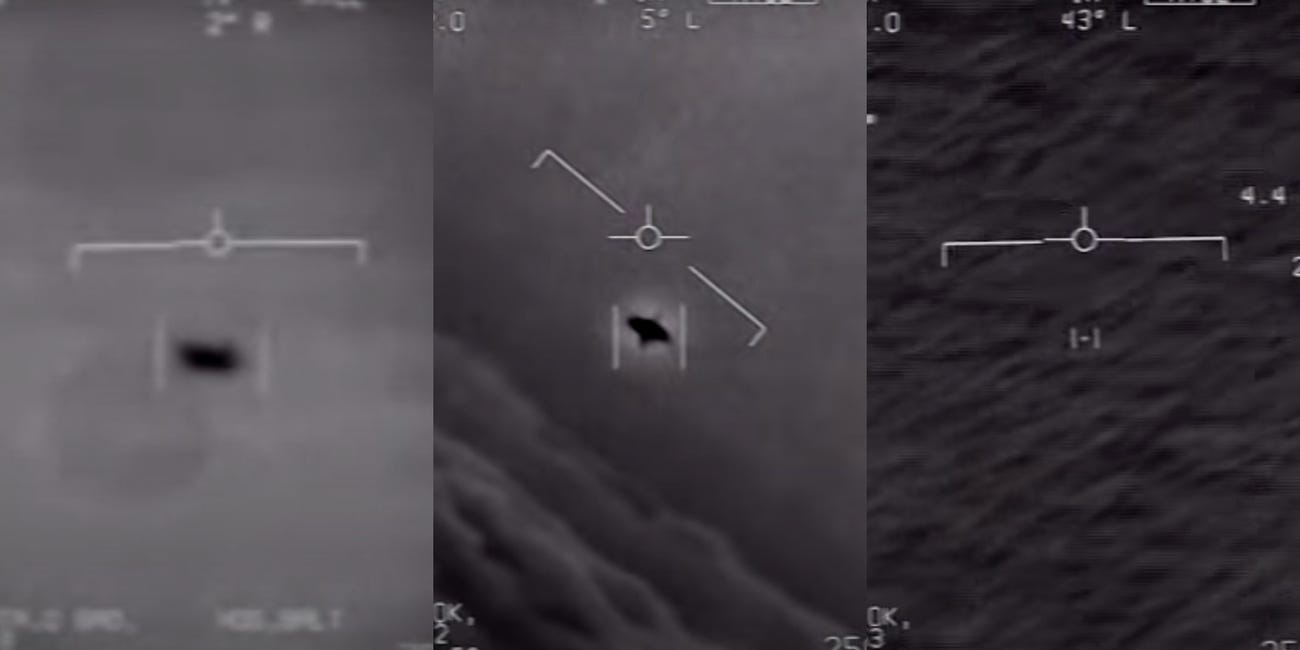 From left, stills from videos released by the Pentagon on Monday — named FLIR, GIMBAL and GOFAST — of “unidentified aerial phenomena.”US Department of Defense

The GOFAST clip shows what looks like the ocean surface as a small object skims past the camera at high speed.

The pilots tracking it can be heard giving a whoop of satisfaction when the camera gets a fix on it. One says, “What the f— is that?”

In the 34-second GIMBAL footage, the aircraft’s infrared camera tracks a saucer-like object flying above clouds as pilots discuss what it could be.

One says it could be a drone, while another comments that “there’s a whole fleet of them,” though no other object is visible in the video.

The object then rotates.

“My gosh, they’re all going against the wind — the wind’s 120 knots to the west,” the first pilot can be heard saying.

The three sightings, which took place in November 2004 and in January 2015, were recorded by F/A-18 Hornet fighter pilots during military training exercises in restricted airspace.

The videos, which were first published by the New York Times in 2017, show fast-moving oblong objects racing through the sky and a pilot, in one video yelling, “Look at that thing, dude — it’s rotating!”

Commander David Fravor, who flew one of the fighters in the video (“Gimbal”), describes the object as “Tic Tac”-shaped, 40-feet long, with no wings, exhaust or discernible propulsion. After some maneuvering, the object ended up hovering above the water. Moments later, it rapidly ascended to 12,000 feet and finally accelerated away at a speed the commander suggested was “well above supersonic.”

When asked if a human pilot could survive such an acceleration in a modern aircraft, Fravor responded with a resounding “no.” Acceleration of that magnitude would wreak havoc on the human body: broken bones, shifting of organs, burst blood vessels and even death would occur as the body was crushed with G-forces it could not withstand.

IF the mysterious object in question was manned by a human pilot, the vehicle would have to be equipped with the technology capable of reducing the inertial mass of the object by generating gravity waves to reduce G-forces during acceleration.

IF this is the Navy showing off its latest tech, then we are in for some incredible travel experiences!

Department of Defense officials decided to release the videos after determining that the footage “does not reveal any sensitive capabilities or systems, and does not impinge on any subsequent investigations of military air space incursions by unidentified aerial phenomena,” Pentagon spokesperson Sue Gough said in a statement.

There is as yet no explanation or identification — official or not — for the mysterious aircraft that the pilots recorded.

Obviously, this is a starter and not the main course. We know this because Harry Reid says so. Reid on Monday said DoD’s recent video acknowledgement only “scratches the surface” of the research into these encounters. 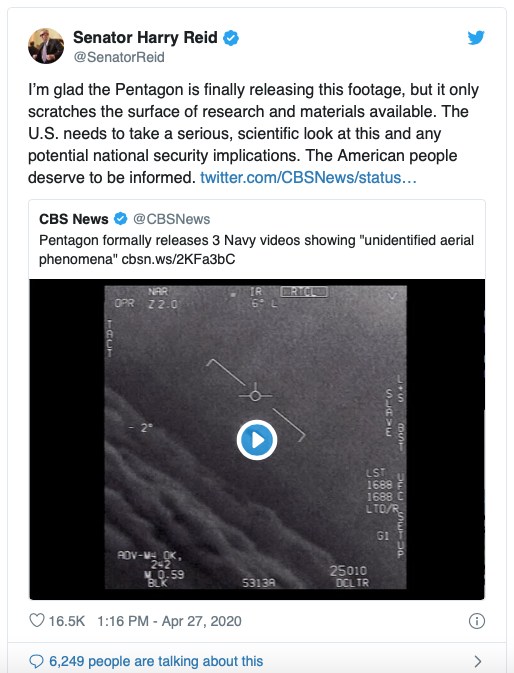 We still don’t know whose craft these are. American? Chinese? Russian? Extraterestrial? Atlantean? Hyperborean? Other?

The answer will tell you whose planet we live on.

The bottomline is we are not alone. Nor have we ever been.